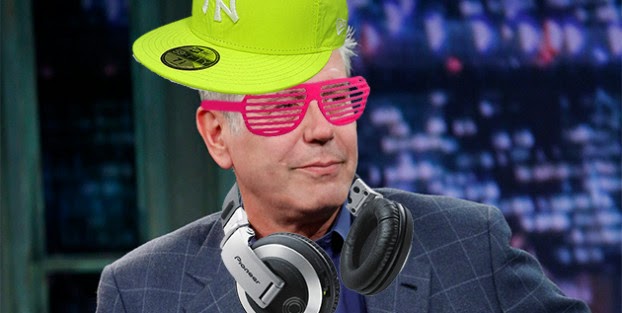 Anthony Bourdain dislikes EDM. He hates it so much that he dedicated 3 minutes of his show Parts Unknown to the subject on CNN.

“It’s a DJ’s world and where once they used to say, ‘Cocaine is God’s way of saying you have too much money,’ now, maybe EDM is,” he said with no reservations.

Anthony Bourdain’s Blacklist: The 50 Most Important People in EDM
In an episode focusing on Las Vegas, Bourdain explained during an interview with magician Penn Jillette that live performance acts were being “squeezed out” in favor of EDM gigs. After the magician explains that he simply does not understand the changing of Sin City’s guard, the chef asks, “Are we just old? Or are we non-douchey?”
Jillette laughs and shrugs off the comment. “You want to spin the latter, I’m afraid it might be the former.” But Bourdain, in voiceover, is not convinced.
The chef recalls Vegas’ former “Gods,” like Wayne Newton and Danny Gans. “What’s the big money draw now?” he asks. “This.” And the screen cuts to a generic rave scene.
“Come ye lords and princelings of douchedom,” he said. “Hear my clarion call. Anointeth thyself with gel and heavenly body spray. Maketh the sign of the devil horns with thine hands. Let there be high fiving and the hugging of many bros, for this is the kingdom and the power.”
He tries to speak to DJ Jason Lima, who works at the Marquee and defends his profession. “What are your dreams like?” Bourdain asks. But as the DJ answers, saying he has images of strobes, the production gets fuzzy and peters out.
– Rolling Stones