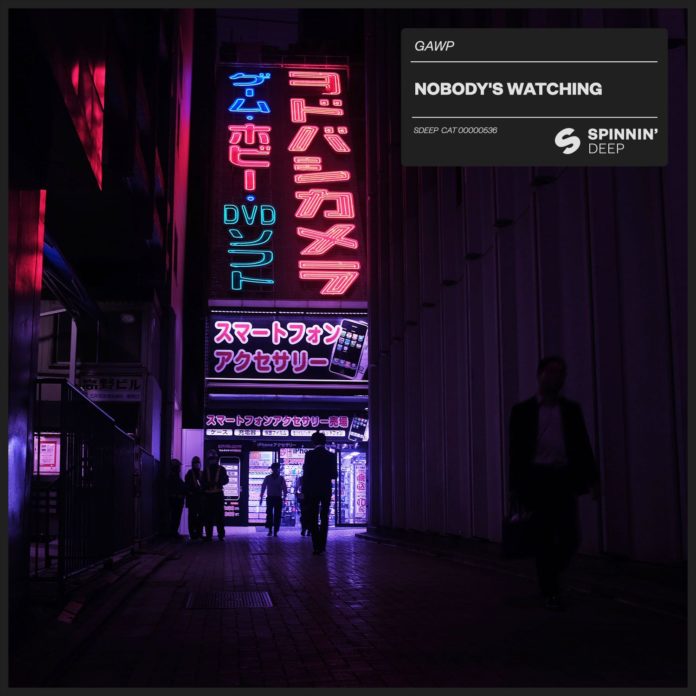 GAWP is no stranger to producing larger than life tech house bangers. His catalogue of hits is quite extensive which includes songs like, ‘Every Weekend’, ‘Blocker’, ‘No Warning’ and ‘Gold Baby.’ As his career continues to skyrocket, Spinnin’ Deep, one of the sub-labels of Spinnin’ Records, signed this superbly talented DJ/producer to its roaster of superstars. On March 24, he made his debut on the record label by releasing, ‘Nobody’s watching.’ The track has got the fans raving and with just one listen to the song, you will know why!

‘Nobody’s Watching’ by GAWP is a stripped-down space shuttle journey beyond the confines of our universe and into a whole other world. As soon as the tones of the song is unveiled, you will not be able to help yourself but to tap your feet along with the rhythm of this well-crafted tune. After the track has sprinkled its cosmic dust all over you, it will then conjure up images of a psychedelic trip into far-flung galaxies.

Over three minutes long, ‘Nobody’s Watching’ is subtle but bouncy and features punchy builds which are tinged with intoxicating energy. The song, as it progresses further, will start to have a grip on you and before you know it, you will find yourself immersed deep within the depths of this groovy track. The combination of crisp production, inventive ideas, and a wholly alluring atmosphere makes ‘Nobody’s Watching’ a winner.

Whatever it is that GAWP eats or drinks, there’s something special that produces some immense musical talent. We may never know the secret of the GAWP diet, but what we can say is that he’s putting out some seriously good tech house hits. He is enjoying great success in the industry right now. GAWP has also been called as “One to Watch” by DJ Mag.

Stream ‘Nobody’s Watching’ on Soundcloud and YouTube Below. Grab your copy HERE!

As a result of a lifetime in the studio perfecting his craft and being mindful to only put out music of the highest standard GAWP has already released a string of tracks on Mixmag’s ‘Label Of The Decade’ Dirtybird alongside a number of highly respected imprints including Elrow, Toolroom, Soup, This Ain’t Bristol, Cheap Thrills, Night Bass and Main Course.

With his undeniably unique sound, GAWP’s profile has exploded in the industry press, with regular coverage in Mixmag, DJ Mag, When We Dip, Earmilk, Nest HQ, Magnetic Mag, Insomniac and Resident Advisor.

This support across the board has quite rightly translated into DJ shows the world over. From his recent US tour with Oliver Heldens and a headline tour of Australia to regular shows throughout Europe, including the infamous Printworks in London. With over 35 US solo shows in almost every major city its clearly proof that DJ Mag are right to tip GAWP as “One To Watch”.