Nother is a multi-talented music producer, composer, and drummer who just released his brand new album on ABYOND Records. While tracks like “Lines” and “Dance Like An Animal” have already been out gaining momentum, the brand new single “As Far As I Can” also featured on the album, “Nother – Future Is Bright” has really caught our attention. This sublime Melodic House & Techno cut is a fascinating ride uplifted with atmospheric elements and swirling bliss. Nother is one of those artists who is big on delivering emotionally-powerful moments and delightfully exhilarating compositions. We are highly mesmerized by the fueling hypnosis of this splendid gem. “Nother – As Far As I Can (feat Endless Recall)” is a lyrical phenomenon that will send you spiraling into a fantasy-driven zones.

Landing on ABYOND Records, “Nother – As Far As I Can (feat Endless Recall)” opens with heartfelt, slow-burning vocals. Endless Recall delivers a captivating yearning that pulls you right into the strings-driven melody. Featured on the new album, “Nother – Future Is Bright,” the song delves into deep and eerie structures. The track relies on soft keys and symphonic pads until the tension reaches the hilt. Beyond that, the tune rises and crashes in an array of silken basslines and Trance-inducing synthwork that will spellbind the audience. The plush percussive strokes and uplifting vocal effects add a spirited side to the song. This ambient track has an organic feel to it that does not sound like a composition that is done to death. Rather, it’s a unique blend of fluid rhythms and lush soundscapes.

“Nother – As Far As I Can (feat Endless Recall)” is soul-stirring effort that will conjure rosy imagery for the listeners. The impeccable sound and highly cinematic structure of this faultless sonic marvel are not just alluring but also quite endearing. You can stream this absolute charmer on YouTube below. You can also grab the album on Bandcamp HERE.

Stream “Nother – As Far As I Can (feat Endless Recall)” on YouTube below!

Looking for more music like “Nother – As Far As I Can (feat. Endless Recall)”? 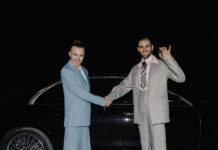