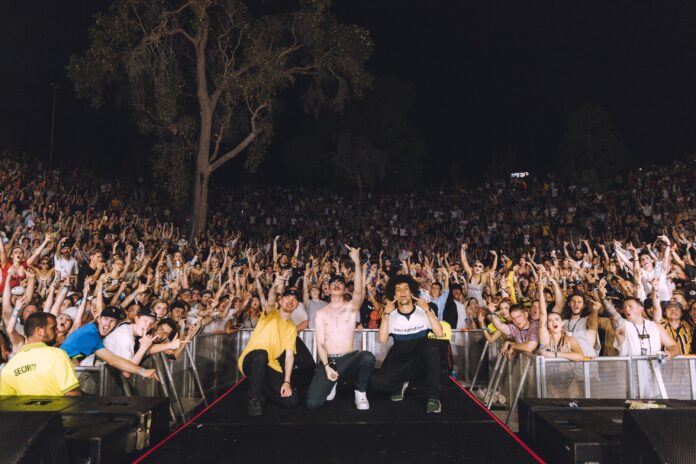 The UK based group Gentlemens Club is leading the bass music scene from the forefront and have established themselves as one of the most irresistible bass music acts. Initially, they were formed as a Dubstep act but now their unique sound includes a bit of every shades of bass, making their releases highly unpredictable. Over the span of five years, the guys have put out many hits including, ‘Rough Rider,’ ‘Gully Mode’ and ‘Never Alone’ all of which have accumulated hundreds of thousands of plays on Soundcloud and Spotify. They have now released their fresh new Bassline track ‘What You Want’ on CRUCAST. The song is over the top catchy and its exhilarating bassline will make festival crowds lose control very soon.

Pretty much every release of Gentlemens Club is innovative and pushes the boundaries of bass music. Their latest track ‘What You Want’ is no exception! It is a hard-edged Bassline track that is controlled by understatedly energetic vocals, frenetic percussion and stellar melodies. It is shadowed by warped, echoing fragments of memory. This CRUCAST release is fueled with infectious percussion which befits the melody perfectly while the highs and lows of the track are treated with equal domination.

The instrumentation of this Bassline track by Gentlemens Club oozes transcendency from start to finish. ‘What You Want’ will captivate the listeners with its hooks. The technical arrangements of the track are stunning and will cast an aura of brilliance, encompassing racy rhythms and soaring vocals. Issued by CRUCAST, it is a fascinating banger that will set dancefloors on fire in a city near you very soon!

We had a chat with Gentlemens Club and asked them many interesting questions. Check out the complete interview with the UK based trio below!

How did it all start for you guys? Tell us how Gentlemens Club is born.

We used to produce under different solo names and we all got booked for a show in Belgium. After the sets we all got to know each other and just hit it off. Started meeting up when we were back in England and that’s how it all started really!

Who was the biggest inspiration / influence on the Gentlemens Club sound?

We take inspiration from everywhere so it’s hard to say… When we first started, we were heavily inspired by people like Skream, Coki, 16Bit and loads more. They still inspire us to this day but we really do take influence from all corners of music

What is the first Dubstep song you’ve ever heard?

Lewis: That’s a hard one, gotta think way back for that question… For me personally I’m pretty sure it was Coki – Goblin, all time anthem

Saul: Mine was Benga and Coki – Night

Amani: I remember the first one I heard was Skream – Midnight Request Line

What do you personally consider to be the incisive moments in your artistic careers?

We’ve had too many to name. Every time we play a huge show we learn something new about our sound and sets

What single night out has been the most memorable for you? As a DJ trio? As attendees? Did you have a “this night changed our lifes” kind of deal?

That’s a tough one to answer. To pick one is impossible. EDC is always life changing. We play a lot of big festivals in America and they’re always eye opening. The crowds are insane. Our headline shows in Perth are always wild. Had some of the craziest times of our lives in Australia. The people over there are great too, it’s like a second home for us. As for attendees, you can’t beat a UK rave. Absolutely love the vibe and the people. We can’t wait to play more UK shows next year

What do you usually start with when preparing for a Gentlemens Club set? Do you make all the preparations together? Is a big part of your set “freestyle”?

A massive thing for us is keeping our sets fresh and different. We go through tonnes of different genres in a set. A lot of our sets are freestyle though, normally we just switch what we do every time, keeps it interesting.

The bass scene is in a great position, it’s really on a come up again. Some of the shows going on in the UK are mental. Crucast are smashing their shows and it’s great to see. We can see a very strong future for bass music for a very long time. It’s here to stay now

That’s too hard to say, so many great years of music… Don’t make us answer this one hahah

Name one thing that you love about the Bass music scene?

The energy and commitment from the fans of the scene, the producers and DJs. It’s such a loyal scene and they show so much love… You love to see it don’t ya

Name one thing that bugs you about the Bass music scene?

Can’t really think of much to be fair, we haven’t had any bad experiences. Everyones been showing love to our sound and sets, especially our new music. It’s all had a great reception

Australia, California, Amsterdam… We could go on forever, so hard to just say a few. Everywhere we’ve been has been great to us. Always gotta love home though, England is where we just love to be

What is your opinion regarding the difference between old school DJing where everything was restricted to vinyl and modern DJing where most tracks are never put on any physical medium before or after release?

It’s just evolution. We have an appreciation for vinyl DJing, think it’s an artform. These days it’s all digital which makes everything easily accessible, which is great for anyone that wants to start DJing!

What is one track that never gets old for you no matter how many times you hear/play it?

What genres of music do Gentlemens Club usually listen to? Are you strictly bass-heavy music?

Mostly listen to rap and hip hop if we’re being honest. Been a huge fan of the UK Rap scene at the moment. We always have been but recently it’s been something else, everyone is smashing it and it’s great to see.

Are you planning on doing livestreams on social medias soon?

We’re going to carry on our Wheels Of Steel YouTube series once lockdown is over so keep an eye out for that. We’ve got some great guests planned for it too…

What was a day like in the life of Gentlemens Club during the lockdown? (except playing COD and drinking beer ^^) Were you all on lockdown together?

We’re all separate during lockdown which is a bit boring but we talk everyday. We’ve been producing like maniacs, we’ve made so much music it’s unreal. Really happy about that. Other than that, not much! That takes up a lot of our time

What are your plans for the near future and what do you want to focus on for 2021?

We’re expanding our sound. We’re exploring our sound. Expect a lot of different stuff from us. We’re going to be playing a lot more home turf shows next year too. It’s about time we brought our sound home and we’re gonna do it with a bang.

UK trio Gentlemens Club is at the forefront of the worldwide bass music scene, leading the next wave of low-end sounds with their genre-blurring style & groundbreaking live sets. Originally formed in 2013 as a strictly Dubstep act the group now incorporates an expansive sound that explores every shade of bass, from trap hybrids to futuristic basslines & beyond. Armed with an endless stockpile of bass bombs, Gentlemen’s Club have cemented themselves as one of the fastest-rising acts in electronic music, certified by their international following, global tours & rapidly growing discography that already counts +25 million collective streams.  Gentlemen’s Club sound pushes the limits of bass music: On any given track, they can flex wobbly dubstep drops, hard-edged subs & electrified rhythms atop intricate melodies and sophisticated sound design. It’s a boundary-breaking approach that has solidified the all-around bass act as one of the fiercest breakout newcomers in dance music of this decade. In five short years, the trio has secured a number of accolades, including: chart-topping original releases & remixes with the leading labels in dance music, including Big Beat, Bassrush, Deadbeats, Interscope & RAM Records; collaborations with electronic heavy hitters like Borgore, Jauz & Kayzo; international radio support and guest mixes on BBC Radio 1, BBC 1xtra & Rinse FM.