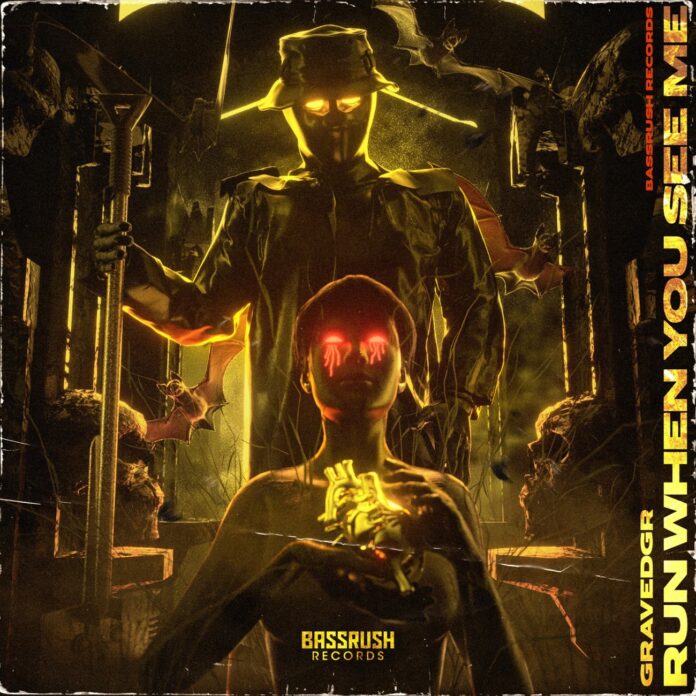 GRAVEDGR has become a big name on the bass music scene. He started off his journey by putting out the track, ‘RAMPAGE’ which brought him a lot of success. The song garnered over 13 million streams on Spotify alone. Since then, he has been unstoppable. This mysterious artist achieved even more fame when he dropped his debut album, ‘6 FEET UNDER’ on Carnage’s label, Heavyweight Records. He has now released another massive anthem called ‘DISTORTION.’ It is a collaborative track with none other than Haaradak. This song is a part of the Run When You See Me EP that also came out today! This extended play contains five tunes including the title track and ‘Show Up.’ GRAVEDGR x Haaradak – DISTORTION is a Hard Trap / Hard Dance number that will haunt you. This new Haaradak music is loud and absolutely unforgiving, it will shake you from the inside out.

Featured on the Run When You See Me EP, ‘DISTORTION’ is a hard-hitting new chapter on GRAVEDGR’s discography. The fusion of Hard Trap / Hard Dance on this explosive opus will decipher a dance-crazed, beatific realm for the listeners. This new Haaradak music is primed with a suspenseful, shimmery bass line and alluring strings until the ambiance is flipped via robotic vocal snippets and trippy synths. Bamboozled with intense drops, the track builds up with insane bass structures. GRAVEDGR x Haaradak – DISTORTION is designed with an impressive mechanically deviating sound design. This disarming tune is fueled with pulsating euphoria of grunge elements and tantalizing riffs that will make you headbang uncontrollably.

GRAVEDGR x Haaradak – DISTORTION is a powerful track that will leave you speechless. It is a soul-shattering tune that takes no prisoners and we just can’t wait for festivals to return so that we can hear it live. This new Haaradak music will assault your senses with its hardcore intensity. Both artists have combined their signature styles effortlessly to create an aggressive Hard Trap / Hard Dance number that will surely create mosh pits at festivals this summer. If you feel this maddening track, make sure to check out the whole Run When You See Me EP. It will blow your mind!

Take one look at GRAVEDGR, and it’s easy to see where his name comes from – constantly donning black attire and his signature face mask. It’s no surprise that his day job is literally digging graves. All the time spent contemplating mortality must have inspired his musical sound. Which can be summed up as simultaneously scary, melodic and hard. His wildly popular debut single “RAMPAGE” has amassed over 13 million streams on Spotify alone. That single placed him firmly on the map, and was quickly followed up by the equally relentless “JESSE JAMES,” “BE WARY,” “KAMIKAZE.