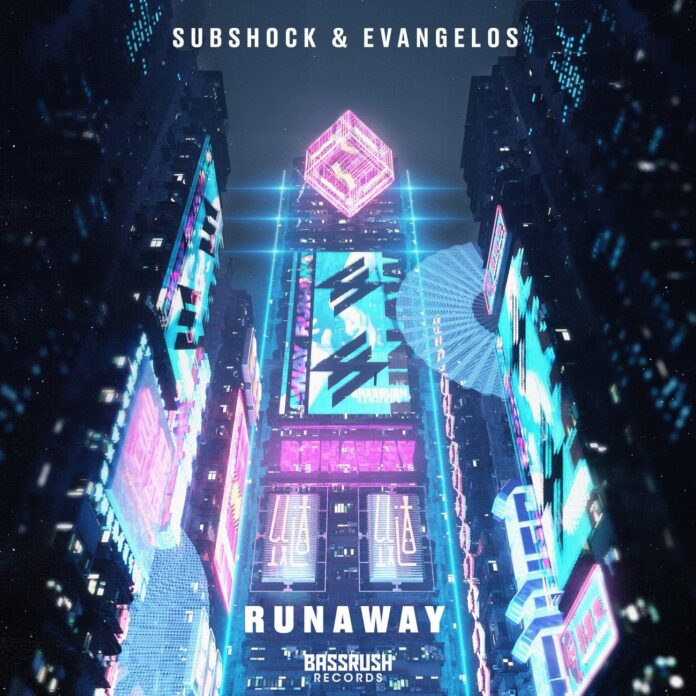 The DJ/producer duo Subshock & Evangelos has been raising the heat on the electronic dance music scene with their captivating tracks like ‘Psyhaus,’ ‘Next To Me,’ ‘Tell Me’ & ‘Like This.’ The group has also garnered recognition and support from some of the most popular EDM acts like Marshmello, Steve Aoki, & David Guetta. The dream-team is now gearing up to flip the club scene with a new Drum n Bass music release, titled ‘Runaway.’ Feel the fire sizzle through your veins with this promising new Bassrush DnB music release. Flourished with colossally-intense and shimmering elements, Subshock & Evangelos – Runaway oozes hardcore regality.

This new Bassrush DnB music release is power jetted with intense melodic euphoria. Subshock & Evangelos – Runaway opens with an ambient splash of crowded bass and soul-stirring powerful vocals that will captivate your attention right away. The track then deepens with hard-hitting pulses and electrifying energy. Following the subtle vocal drop, this new Drum n Bass music song launches into crashing percussion with mind-altering riffs and a smashing bassline. The duo pulls serious punches with flashy rhythms, and blazing synths that slap with an exuberant force. However, an unexpected twist following the buildup will leave the listeners craving for a release from the mounting tension. The mesh of soaring vocals and chaotic instrumental arrangements nosedive to a thundering fall into ominous rhythmic patterns that instantly transform the whole vibe of this song.

Subshock & Evangelos – Runaway is a dynamic ride of electronic and synthetic fluidity that pounds and rumbles with a futuristic reverb. Yet this new Drum n Bass music has its moments of levitating resonance that flows with eerie sweetness. This peak-time cut is primed with hard-edged beats and crisp textures that will set any stage or floor ablaze. Nevertheless, the enchanting vocal sections lead the song into an extremely addictive zone displaying the duo’s musical sensibility. This Bassrush DnB music release is an earth-shattering tune that deserves all the praise.

Hailing from Spain & Belgium, Subshock & Evangelos has been establishing themselves across all platforms for some time now.

Teaming up with industry peer Juicy M, their breakout hit “Psyhaus” (Spinnin Records) has surpassed over 10 million streams worldwide. Catching attention and gaining support from industry elites such as David Guetta, The Chainsmokers, Marshmello, Tiesto, Steve Aoki, and Don Diablo to name some. Subshock & Evangelos has gone on to release records on Dim Mak, Warner Music, Universal Music, and many more.